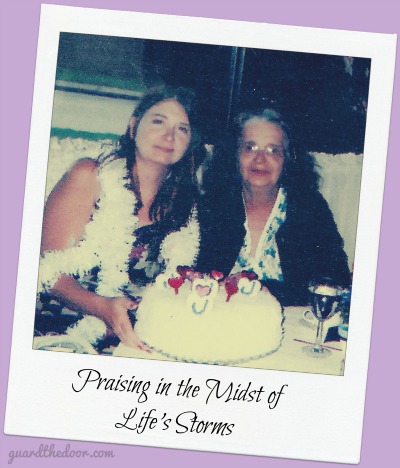 My blog has been pretty quiet for the past few months and with good reason. I wrote this post late in the morning back in December after my sweet mother died. As time has passed, I feel God is telling me it is time to share about this remarkable lady I had the privilege to call my mom and friend.

The rain is falling in my life right now. In fact, it’s what we call a tropical downpour in the south, and I feel like I’m drowning.

You see, 6 years ago, my precious, kind-hearted mother was diagnosed with her first aortic aneurysm. The fact it was found in the first place was a sheer act of God because no one suspected it. My mother and I had traveled to Baltimore for my cousin’s wedding knowing that she wasn’t feeling well, but there was no way she was going to miss such an important event. When we returned, she was admitted to the hospital with pneumonia. A nurse practitioner just “had a feeling” that something wasn’t quite right and ordered a CT scan. That’s when they found the first one.

Terrified, after watching what my father went through with open heart surgery and then years later succumbing to heart disease, I now had watch my mother go through the same thing. During that time, God kept sending me a song. The same song. Over and over. He does that all the time with me. That song was “Praise You in this Storm” by Casting Crowns. I would listen to it over and over, until I felt God literally lift the pain out of my…heart.

Her recovery went very well, but two years later they found another aneurysm. This time it was in her back. This required yet another operation, but this one ended up being far worse. Because of the positioning of the aneurysm and the surgery to repair it, it caused a brain/body disconnect. God almost took her that time, but He didn’t. She wasn’t done on earth yet. God gave her the strength to basically learn how to walk again, and she did. In fact, she worked so hard for months, that she was able to go from being in critical condition with afib to traveling to Disney World for our annual family trip. She had faith, strength and perseverance like I have never seen.

I had always known that my mother was the strongest lady and that she believed in God. The funny thing is, she rarely spoke about God. I never questioned it, never doubted her faith, I just knew. Every ounce of her was filled with strength, compassion, generosity, and love. She had more than her fair share of heartache in her life, but you would never know it. The way she dealt with grief, pain and heartache was to give more, to love more, and to always have faith that God would provide. She rarely had a bad word to say about anyone. The love she poured out and into our family, especially to my ailing father for all those years, was just who she was. I think that’s why now people who knew her are saying she was “one in a million”. She was. And she was my mom. I was so blessed.

In April 2013, she was diagnosed with yet another aneurysm. This time there would be no surgery. Surgery would definitely cause her death and the doctor would not put her through it. Even her doctor didn’t want to give her the nes because he said she reminded him so much of his own mother. She basically had a ticking time bomb in her body. The last time she had an aneurysm that size, they had to rush her to surgery within three weeks.

I started to freak out in my head. I knew I was my mom’s primary caregiver and that she lived alone. I knew it was likely that I would find her after the aneurysm took her life. The doctor had told us that once it ruptured, there wa absolutely nothing anyone could do. Since I homeschool our children and they are always with me, they would be witness to it as well. Four years prior to this, I had been taking care of my mother in law who was also ill and lived down the street from us. I found her in her home. The likelihood was that I would now find my own mom. The thought was unbearable. I anticipated that she would not be with us by the end of that month.

I struggled with whether we should tell our children about their grandma, so that it could prepare them, but at 5 and 7, how could they prepare? How could I even prepare for it? Finally, a friend of mine said to me to just pray for healing. When the thoughts would come, pray for healing. God had it covered. We are told not to worry (something I do not do well!) and give it to Him. Just pray for healing. That is exactly what I did. I never told them their grandma had a terminal diagnosis. Instead of them dwelling on the inevitable, they enjoyed every moment with their grandma and I made sure they spent as much time as possible with her. I thank God for the ability to homeschool because it gave all of us extra time with her and time is something you can’t get back and you still never have enough of.

What we didn’t know back then was that God was not only going to give us three weeks, He was going to give us 19 months with her. We would have more trips to Disney, more holidays, more birthdays. More time. And we were thankful for each and every day, making the most of it. Not dwelling on the ‘ifs’ or ‘whens’. Not dwelling on the end of it all, but the beginning of each day as I continued to praise in the midst of life’s storms.

Fast forward to today. The first full day without my mom. God knew all along how it would end. Instead of my children and me finding her, she was just with me. She had recently taken a few falls and was having trouble walking. My sister was staying with her at night and I would come over during the day. She developed a cough, so we convinced her to go to the hospital. We thought for sure they would admit her. We never thought the stay would not be paid for because they couldn’t find anything that would be ‘billable.’  She decided to go home and not end up with thousands of dollars worth of bills. Knowing that her clarity was going in and out and she could barely stand, let alone walk, I decided she needed to stay with me since my house had no stairs. We had a nice night, my wonderful husband made her dinner, the kids cuddled up with her, we said nightly prayers (the first time she ever heard her grandson say prayers), watched tv and went to sleep. She woke up and I took care of her. Then the aneurysm took her life and my mom went to be with the Lord. She was finally reunited with the man she loved for so long and her infant son who she longed for ever since she had to say goodbye to him.

It was over. She was gone.

We had finally reached that inevitable day. I lost my best friend. My heart and those of my family are breaking. My children who loved her and were so close to her, are processing this the only way they know how. Playing. Somehow I think that’s how God would want it. Celebrate. Praise. Be joyful! This is not the end, but the beginning.

And then He did it again. This morning, the very first full day without her, the day I can’t just pick up the phone or drop in to see her, THE song comes to me again. As I’m feeling overwhelmed and not knowing how I will go through life differently now, He sent me a very clear message. When I am in the midst of the storm, when the rain (my tears and heartache) comes, raise my hands and praise and raise them again. Over and over. He will hold every tear in His hands and that is the only way I will get through this. Everyone keeps telling me how strong I am and how I am being strong for everyone.

But it’s not strength, it’s faith.

And that is the biggest blessing my mom left with me. It’s not anything that I do that makes me strong, it’s WHOM I belong to who gives me strength. It’s my faith that will see me through. My mom taught me that without ever knowing she did. Today, I am heartbroken, but I am thankful. As my tears continue to fall, I praise Him and I literally can feel His presence. I feel like with every tear that falls, He replaces it with grace and compassion. My mom may no longer physically be with me, but she IS with me, and she always will be. She is literally in my DNA and that of my children. Her legacy of faith, generosity, compassion, strength, unstoppable courage, and love will continue for generations to come.

With hands lifted high, I praise God for the amazing mother He blessed me with and the grace that He is covering me with today, as always.

As I always said when I left her house, “Bye Mom. I’ll talk to you later. I love you.” And I will.

If you have ever lost a parent, I know you know the pain is unlike any other. My heart and prayers are with you if you have, or if you are currently caring for an ailing parent. I would love to have you share your stories with me on my Facebook page.

If you have not heard the song I referenced, here it is… Special thanks to Neyolov for sharing this video. 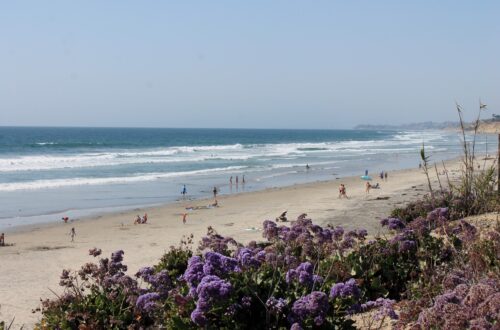 Awesome Things to Do with Kids in San Diego